Originally published on the site of NL Agency

On February 8, 2013, the first new high speed bullet train, N700A Shinkansen, started operations between Tokyo and Osaka in Japan in six years. The N700A, developed by Central Japan Railway Company (JR Tokai), is now equipped with constant speed control systems, vibration detection systems and new braking systems. The new innovative systems contribute to the safety of operations. A unit of N700A costs about forty million euro. JR Tokai will gradually introduce six or seven units of N700A every year. The Japanese bullet trains are competing with air flights. The N700A focuses on safety and comfort, while the other high speed bullet trains, new E6 train and the near-future Maglev, focus on speed.

The Tokaido Shinkansen, which started operations in 1964 between Tokyo and Osaka, is the most popular bullet train in Japan running more than 300 times a day and transferring about 390,000 passengers a day. The new N700-Advanced (N700A) Shinkansen, the latest model of the Tokaido Shinkansen, is not different from the previous model N700 in terms of appearances and the top speeds of 270km per hour (fig.1). The N700A is competing with air flights, but not on speed. Focus of the N700A is on safety and comfort. The new safety devices are constant speed control systems, vibration detection systems and new braking systems. The constant speed control systems and vibration detection systems are new for a bullet train in Japan. In case delays occur, operations of N700A will be automatically handled by the constant speed controller which enables train to recover from delays more quickly than drivers. This is because drivers tend to control speeds precisely, although it is not necessary to do so when delayed a lot. The constant speed controller accelerates or decelerates speeds along with automatic train control (ATC) signals based on traffic signals, train positions and railway data, while computing the influence by the railway infrastructure such as curves and tunnels (fig. 2). The average delay on the Shinkansen is only thirty six seconds for a year. However, once a train delays, it influences a lot of other trains running on the railways. The constant speed controller is not used for normal operations. It will be used when it needs to recover quickly from delays. The vibration detection systems monitor the vibrations from every rolling stock in train and detect the abnormal vibrations coming from minor faults, aiming to prevent accidents. The new braking systems are composed of new center fastening brake disks. It will be activated in case of power cuts caused by emergency such as earthquakes. The new is ten percent faster in stopping than the N700 model. For normal operations, regenerative brakes are used and convert the generated energy into electricity. Aiming at more comfort in train, the N700A is now equipped with noise reduction sheets and panels providing passengers with a quiet environment. A unit of N700A costs about forty million euro. JR Tokai will install six units of N700A by the end of March 2013. They plan to gradually introduce six or seven units of N700A every year. On the other hand, they will improve safety specifications of the existing N700 model by installing most of the new safety systems developed for N700A. The new E6 train “Super Komachi “, developed by East Japan Railway Co. (JR East), will start operations for the Akita Shinkansen on March 16, 2013. The E6 will reach 320km per hour, which will be the fastest train in Japan. They are competing with air flights for the Tokyo-Akita route. JR Tokai plans to construct a new railway for maglev Shinkansen (Chuo Shinkansen) taking an hour between Tokyo and Osaka with the top speeds of 505km per hour. JR Tokai plans to start the service in 2027 between Tokyo and Nagoya, and in 2045 between Tokyo and Osaka. The Japanese bullet trains are competing with air flights on safety, comfort and speed. 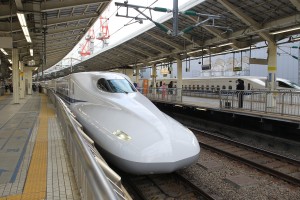 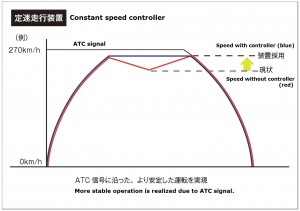 This entry was posted in Hightech Systems and Materials, Logistics and tagged Shinkansen. Bookmark the permalink.