Originally published on the site of NL Agency

On January 30 – February 1, 2013, the world largest nanotechnology exhibition and conference, Nano Tech 2013, was held in Tokyo. The Dutch nanotechnology consortium NanoNextNL set up a Holland High Tech booth, joined by co-exhibitors from Delmic B.V., Syntens, TNO and Delft University of Technology. Aiming at Dutch nanotech promotion, Dutch exhibitors were honored to give a pair of Dutch soft wooden shoes to Mr. Satoshi Shimizu, Manager of the Marketing Department of Towa Co., who won the prize by a drawing among many other visitors to the Holland High Tech booth. Towa is involved in the development of new electrochromic device components. They are interested in possible collaborations with partners in the Netherlands.

The delegation of Holland High Tech, led by Prof Fred van Keulen who is vice chairman of Dutch nanotechnology consortium NanoNextNL, came to Japan to exhibit at the 12th International Nanotechnology Exhibition and Conference (Nano Tech 2013) in Tokyo Big Sight on January 30 – February 1, 2013 (fig. 1)(1). And delegation members exchanged views with Japanese research organizations such as NIMS and AIST for possible collaborations. Before the exhibition, they visited one of Japan’s major research institutes, the National Institute for Materials Science (NIMS), in Tsukuba and joined a seminar with presentations given by NIMS, NanoNextNL, TNO, Delmic B.V. and Syntens.  Aiming at Dutch promotion, Dutch exhibitors gave a pair of Dutch soft wooden shoes as a prize of the many visitors to Holland High Tech booth. It was won by Mr. Shimizu Satoshi, Manager of the Marketing Department of Towa Co., Ltd. (2).  Mr. Satoshi and his family are pleased to have received this prize at his office in Tokyo (fig. 2). Towa is a Japanese small company located in Tokyo, which develops and manufactures magnet systems for semiconductor equipment companies such as Canon Anelva and Tokyo Electron. The Nano Tech 2013 featured more than 800 booths from 571 companies and organizations including twenty-two countries and regions out of Japan. It gathered more than 46,000 visitors in total. The nano tech 2014 will be held on January 29 – 31, 2014.

Towa’s new approach is to develop new nanomaterials for an electrochromic device (ECD).The prize winner Mr. Shimizu is the project leader of the ECD project. At Nano Tech 2013, Towa exhibited a prototype of ECD which was co-developed by the Green Technology Research Group of the National Institute of Advanced Industrial Science and Technology (AIST)(3). Dr. Tohru Kawamoto leads the ECD research project for AIST (4). The ECD is composed of light control glasses using technologies of reversible oxidation-reduction reaction for changing colors. It electrically switches colors between a transparent mode and a deep blue mode (fig. 3). ECD technologies are already applied in Boeing 787 windows developed by US company PPG Aerospace using tungsten oxide-based materials for layers on glass. Towa and AIST are involved in developing nanoparticles of Prussian blue (PB) and materials similar to PB. Prussian blue is a material widely used in paintings. Mr. Shimizu told the advantage of Towa’s ECD technology is that it consumes no electricity once a color is changed. It only consumes electricity while a color is changing. And it makes it possible to switch colors between blue and yellow by changing voltage levels. The number of colors can be increased by using color films. Towa is involved in development of mass production technologies of EC materials. It is aiming to commercialize possible applications such as a large size advertisement board and e-paper in the near future. Towa is interested in possible collaborations with partners in the Netherlands. Other Japanese companies including Alps and Kanto Chemical Co. are also involved in the ECD project led by AIST. 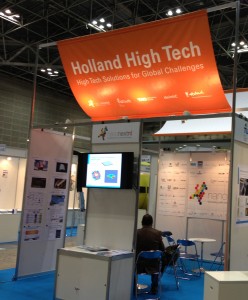 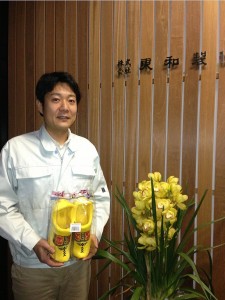 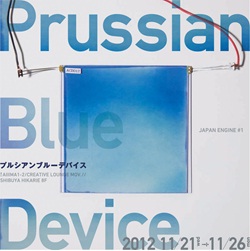 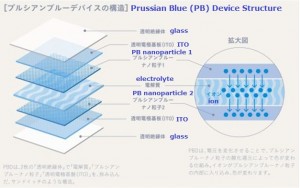